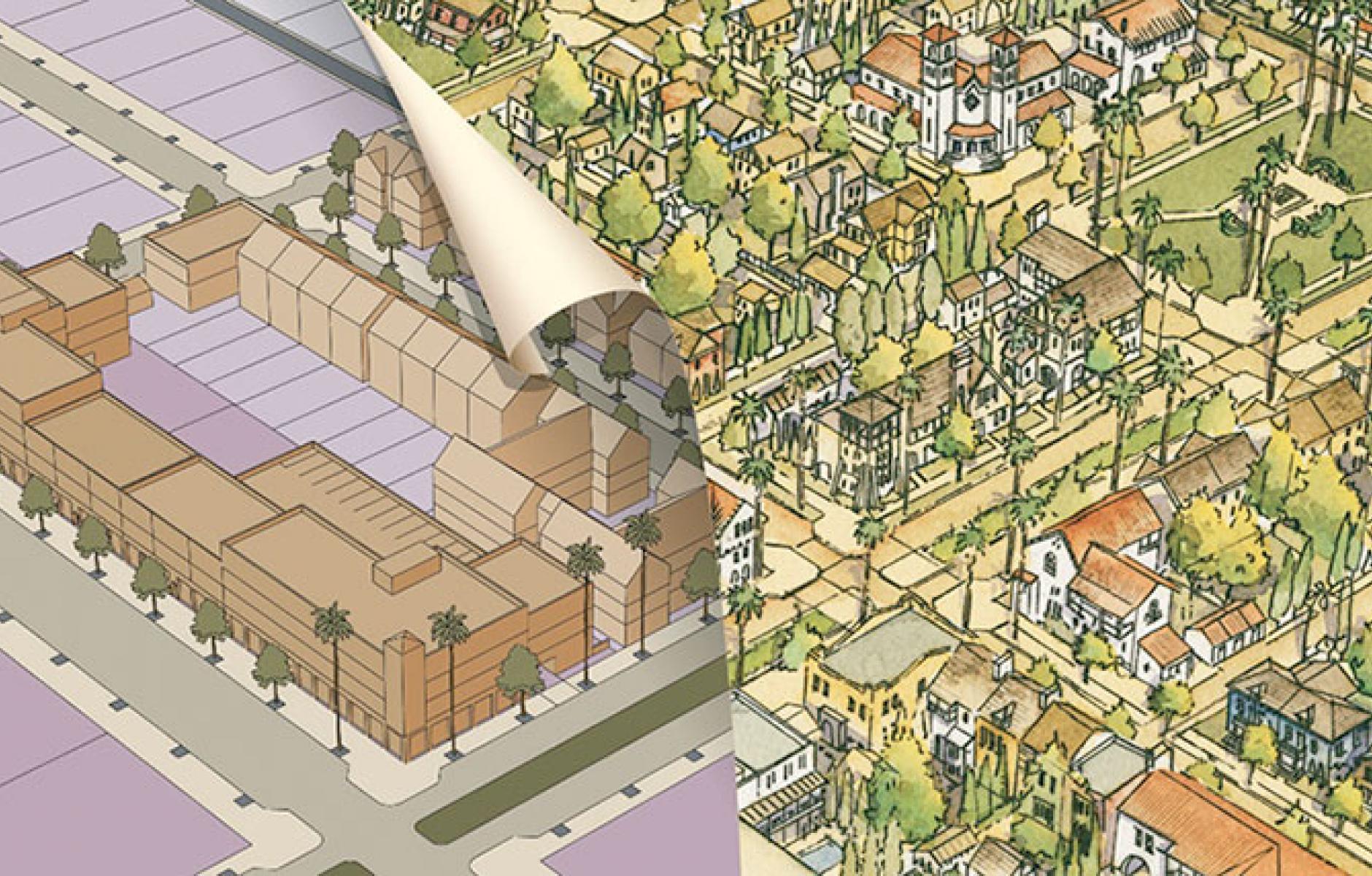 Image by Opticos Design
The Form-Based Coding process ensures that the discussion about where and what type of housing to allow happens at a community level, rather than on a project-by-project basis.
KAREN PAROLEK    DEC. 7, 2016
By-right zoning is getting a lot of buzz these days as a needed tool to help solve the affordable housing crisis many communities are facing. For those unfamiliar, a zoning code is considered “by-right” if the approvals process is streamlined so that projects that comply with the zoning standards receive their approval without a discretionary review process.

Housing advocates and developers rightfully claim that discretionary review processes are contributing to housing crises across the country by increasing the cost and delivery rate of housing, and often directly preventing needed housing from getting built. President Obama, Governor Brown of California and the State of Massachusetts have joined the “by-right zoning” bandwagon, and here at Opticos, we’re on board, too.

However, residents, environmental groups and others are rightfully upset about the idea of by-right zoning because it often seems that the discretionary review process is their only tool to prevent inappropriate and out-of-scale development. Their zoning codes are too blunt to provide the needed control, so they cling to discretionary review as their only protection. Admittedly, in some cases, this may be NIMBY’s refusing to allow more or certain people into their communities. However, in many other cases, it’s community members from all walks of life who want walkable neighborhood living rather than city living. They feel they have no other tools to compel developers to be respectful of their cherished places. From this perspective, by-right zoning may have Jane Jacobs rolling in her grave. 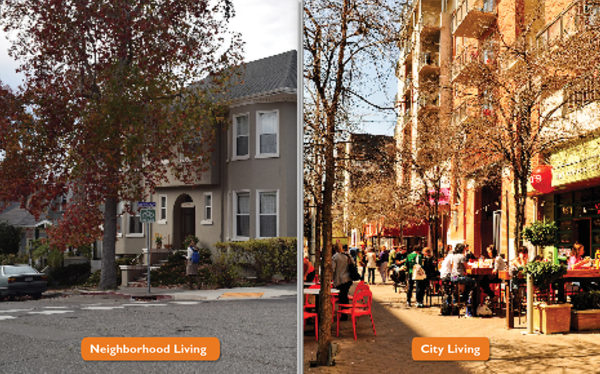 Conventional zoning is too blunt for a by-right process

Without fixing these problems, removing the discretionary review process in cities and towns with conventional zoning could detrimentally impact our walkable neighborhoods.

Fortunately, we have a proven solution: Form-Based Codes (FBCs). FBCs regulate the form of the buildings in a prescriptive manner and at a sufficient level of detail so that the outcome is predictable. This renders the design review process unnecessary, enabling by-right review. FBCs work like this:

First, the community comes together to create a physical vision for their places, including important details about how the buildings must be built to contribute to the public spaces that are our streets and plazas. The community can dial up or down the level of detail they include based on what they want to allow or require in their neighborhoods.

Importantly, the visioning should also include a community discussion and decision-making about how much and what type of housing is needed and where to put it, preventing later project-level battles. This is the best time and place for communities to show leadership in advocating for all constituents’ right to decent, affordable, walkable housing options, and for neighbors to consider their desires for their own neighborhoods within the context of how many families are homeless or paying too much of their income for housing and transportation.

Once these decisions are made, the FBC is written to prescribe what can be built, mostly by focusing on the form of the buildings as they shape the public space, although also including simplified use regulations. Examples include regulating front build-to lines—rather than setback lines—and maximum footprints to prevent buildings that are too large for the neighborhood character. All of these regulations are carefully written to reflect the context—the regulations for a downtown main street will be different than for a streetcar suburb or for a large city center. They are also written to regulate only what is truly necessary, removing unnecessary or obsolete standards.

Because of the prescriptive and simplified nature of FBCs, the community can more easily understand what the code is allowing and can work with city staff to vet the code to ensure the prescribed outcome is appropriate for the neighborhood. In other words, everyone can actually understand the code and its intention, so everyone can help make sure it’s right.

Once the desired outcome is prescribed appropriately in the FBC, the code can then include a by-right review process. A discretionary process is no longer necessary because the community can be confident that what will be built will be appropriate.

The by-right review process then enables developers to know all of the requirements before they start the design process, so they can create a more accurate pro forma to determine whether the project will be viable. They will also only have to design the building once, saving the cost of multiple redesigns. The lower cost and lower risk of development under a by-right process will contribute to making projects more viable, leading to more housing being built, and to lowering the cost of that housing. In addition, this lower risk on all of their projects within FBC areas can enable developers to lower their profit margin thresholds, since their profit margin will not need to cover the cost of projects that did not survive a risky discretionary review process.

By-right zoning is needed, so let’s get it right

By-right zoning is critically important to increase housing affordability at all levels of the housing spectrum. To get it right, conventional zoning codes need to be updated to FBCs to effectively prescribe the outcome desired by the community, enabling communities to confidently let go of discretionary review. FBCs with by-right zoning contribute to housing affordability, ensure that development meets the community’s vision, and help to provide housing options for everyone who wants to live in a walkable neighborhood.

This article first appeared on Logos Opticos, the blog of Opticos Design.