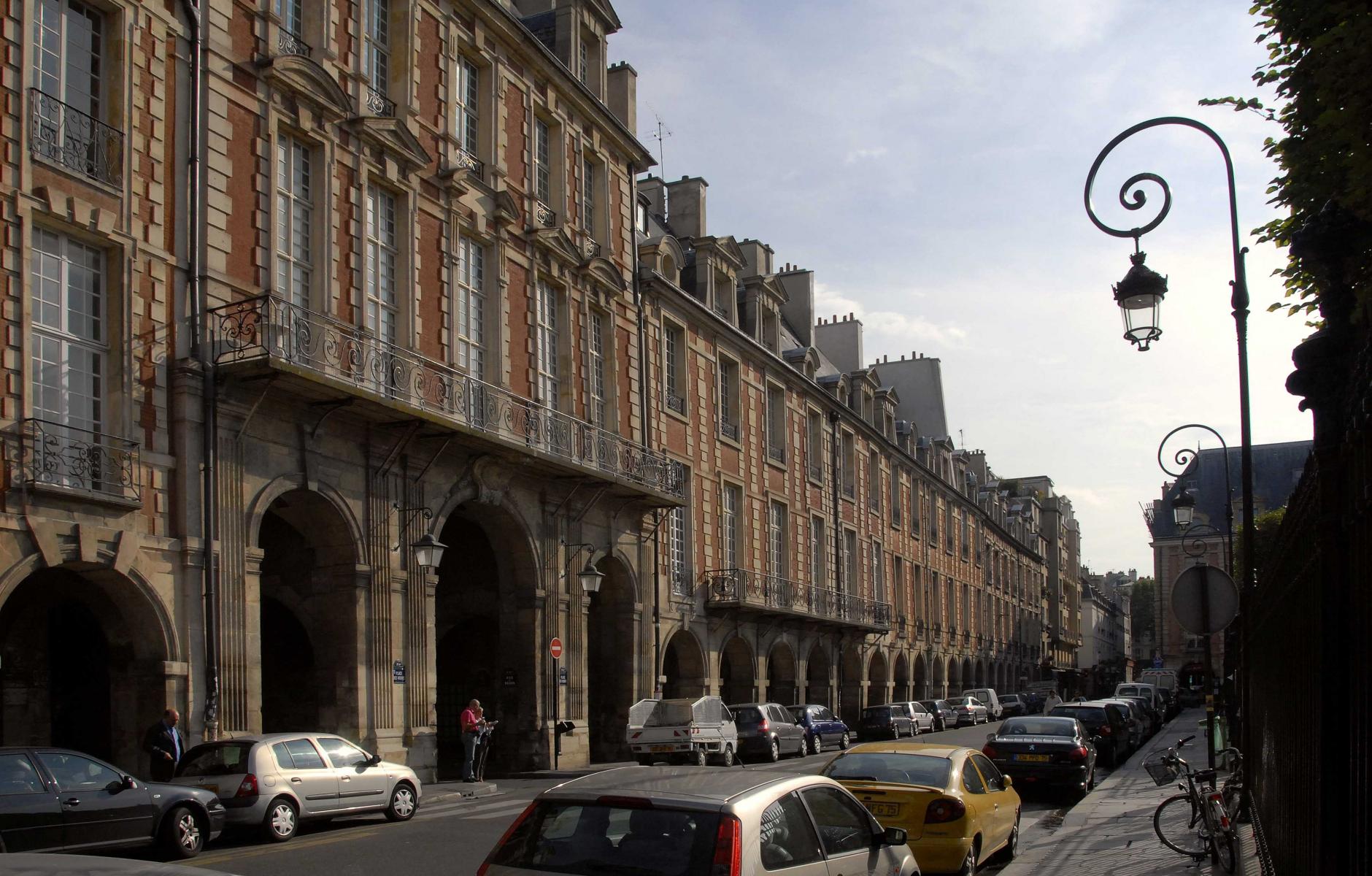 Variety within a narrow range gives distinct character to the Place Des Vosges in Paris. Photo by Steve Mouzon.
The most-loved places are comprised of buildings with an endless variety of details within a limited range of architecture, giving distinct and recognizable character.
The most-loved places around the world vary enormously. At first glance, there seems to be no common thread, because it is the uniqueness of each of these places that makes them notable. Further observation, however, yields at least one common thread: each of them exhibits great variety within a very narrow range. And it is precisely the narrow range that gives them their identity. Look at the photos below. Is there any doubt as to what part of the world in which each is built? Many people can probably name the town and maybe even the neighborhood at a glance.

A very narrow range of variety may at first appear to be very similar to no range of variety because the range is so small, but they are actually polar opposites: great variety is the opposite of no variety, even when (or especially when) the range is narrow. The narrow range is necessary, because it is only by editing things out that you make a place distinctive. Allow anything, and it could be anywhere. Narrow the range, and you have taken the first step towards creating a sense of place.

People judge the vitality of a place by the amount of variety. Create everything out of five standard models, and it will appear dead. Allow things to vary slightly from one building to the next, and the place starts to live. So the narrow range is necessary to define the character of a place, while the wide variety is necessary to make it live. Combine both, and you have a chance of creating what Christopher Alexander calls “the character without a name.” Or put another way, a narrow range without great variety creates mechanical objects; great variety without a narrow range creates disconnected randomness. Combine the two, and you have a chance of creating a living thing.

What’s the difference between these places shown in photos below? Why do millions from around the world visit the second, while the first has never had a single tourist, and never will? The architecture in both places has variety and the urbanism is similar on both streets. But look closely at the architectural variety: one place has precisely the variety within the narrow range that makes it live and be loved for centuries: the same idea created all the bay windows, all the eaves, all the gables, etc., but no two are identical. The other has five standard models that are built out of precisely the same details: the same eaves, the same siding, the same columns, the same foundations, etc. This is fake variety of the worst sort. If there is any doubt as to whether the customers understand this or not, look at the price of real estate in each place.

So how do we go about making living settings with an identity of place? The best method is a vernacular mechanism, in which place-making wisdom is held by everyone in a culture, rather than just the architects, and we trust the people again to make the sequential little decisions that created the “most-loved places.” We’re working toward that, but it won’t happen overnight.

The first step is to build by coding rather than building by designing. In other words, tell many people what to do and let them do it rather than designing it all yourself. One person cannot possibly think of as many variations as many people can, nor will one person consider it efficient to draw a thousand details, whereas a thousand people will naturally create the variety by simply doing what they each naturally do. As the code grows into a living tradition over time, the engines of the vernacular mechanism will rumble back to life.

The best example I have ever seen of a coded place with great variety in a narrow range is the Place Des Vosges in Paris (see photo at the top of the article). As a matter of fact, it could be a Rosetta Stone of sorts, unlocking secrets of living variety for code-makers today. It is Paris’s oldest square, dating from the early years of the 17th Century, and is a bridge between the medieval city and its building methods and the later Renaissance city. The specific code or plan used to create the Place Des Vosges has apparently been lost over time. Popular sources have Baptiste du Cerceau as the likely designer, but not even that is totally certain. So the most useful question to ask isn’t “what did the lost code look like?” but rather “how can we accomplish the same thing?”

Look carefully at the photos below. They represent a few of the 39 houses ringing the Place. Because of the tight quarters inside the fence of the central square, these shots include only the upper bodies of the buildings, although the arcade exhibits a similar variety. At first glance through the desensitized lenses of our post-industrial architectural vision, these buildings might appear to be all the same. They all are four-bay brick structures of exactly the same width and eave line, with hipped & dormered slate roofs of the same slope surmounting a two-story body on a stone arcade. But somehow, it feels right… it feels alive. Nothing like the buildings we extrude today, like toothpaste out of a tube. What’s the difference?

Look closely at one element at a time, such as the outer circular-roofed dormers. Or the balconies and their railings. Or the window heads. Or the central dormers. Each varies slightly, from one house to the next, like leaves on a tree; no two are exactly the same. How did they do this?

It is hard to imagine that Baptiste du Cerceau (or whoever) scenographically designed each elevation with slightly different details. So if not, then how? The simplest rational explanation is that the builders of each pavilion were given verbal instructions, at most accompanied by very simple drawings laying out the important characteristics (eave lines, etc.) of the Place, leaving the minor details to the master builder of each of the houses.

Form-based codes of today can, in theory, do precisely this. But the built products of many current form-based codes either devolve into sterile sameness when the developer decides to “be efficient,” or devolve into chaos when lot-purchasers demand to do “my thing.” In other words, too little variety or too big a range. So what are techniques that might help create great variety in a narrow range with today’s most common building delivery methods?

Custom-designed houses on lots sold directly to homeowners are usually designed in too wide a range. Responsibility for this usually falls at the feet of the architects; few except dedicated new urbanist architects understand the value of coherence in a place. The most effective tool for developments marketed this way is a good pattern book, which is a set of instructions to designers intended to produce coherence. Any bona-fide New Urbanist pattern book is a huge step in the right direction for a custom-built development, but there is an intriguing new type of book that resolves many of the problematic issues of pattern books to date.

A more recent idea in pattern books is principle-based books (as opposed to the earlier style-based books) which code for the best architecture for the regional conditions, climate, and culture rather than for a collection of historical styles. Because they code for low, medium, and high settings of a single architecture rather than for many styles, they can drill down much deeper into the patterns of the architecture. And they explain the rationale for each pattern. Instead of the style-based books’ unspoken premise that “thou shalt do this because I have better taste than you…” that produces compliance at best, the new books explain “we do this because…” allowing everyone to think again.

One solution might be to do schematic drawings (stock-plan-level detail at most), then allow the small variations that occur between framing crews, trim crews, and masonry crews to naturally occur. The problem here is that the detail departures of today’s subcontractors cannot be trusted because they default to the horrible details that produced American suburbia. Here there is no substitute for direct education of the subcontractors. The core tool is a good set of drawings by an architect familiar with the principles of the New Urbanism, including “let the street have the ‘street appeal’ and allow the buildings to be calmer.” Beginning there, every framer, mason, and trim carpenter should have a copy of a good syntax code that explains the basic Do’s and Don’ts of traditional construction. Beyond that, builders workshops are extremely helpful because when construction workers see proper details built before their eyes, they realize that “I can do that,” and they never get it wrong again. Workers have literally come to builders’ workshops in the morning knowing they would be wood-butchers or brick-throwers the rest of their lives and have left at the end of the workshop realizing that they can be craftspeople, building details correctly in their hometown for the first time in a hundred years.

Partially- or wholly-manufactured buildings (panelized, modular, or manufactured) have their own set of challenges. Assembly lines exist to churn out large numbers of identical items without retooling, in order to get the price and time down. That objective seemed irresolvable with the idea of making each building slightly different. The best you could have is the “five standard options.” Yet it has been discovered recently, and quite by accident, that if you manufacture houses that seem just a bit too simple, but that are easily modifiable, people will make weekend projects out of customizing them to their own preferences. The modifications can be minor: adding capital trim to a square wood post, adding brackets to a porch beam, adding trim around a door, etc. The key is that the buildings are simple enough to encourage owner modification, and that they are built of materials that allow modification — meaning that they can be sawn into and nailed onto, then painted.

This article first appeared in New Urban News, later called Better Cities & Towns. For more on Steve Mouzon’s ideas about variety within a narrow range, watch this video from the City Building Exchange of 2016.