US DOT and FHA website on roundabouts:
Roundabouts and Mini Roundabouts
http://safety.fhwa.dot.gov/intersection/innovative/roundabouts/

The capacity of a roundabout varies based on entry angle, lane width, and the number of entry and circulating lanes. As with other types of junctions, operational performance depends heavily on the flow volumes from various approaches. A single-lane roundabout can handle approximately 20,000–26,000 vehicles per day, while a two-lane design supports 40,000 to 50,000.

Under many traffic conditions, a roundabout operates with less delay than signalised or all-way stop approaches. Roundabouts do not stop all entering vehicles, reducing both individual and queuing delays. Throughput further improves because drivers proceed when traffic is clear without waiting for a signal to change.

Roundabouts can increase delays in locations where traffic would otherwise often not be required to stop. For example, at the junction of a high-volume and a low-volume road, traffic on the busier road would stop only when cross traffic was present, otherwise not having to slow for the roundabout. When the volumes on the crossing roadways are relatively even, a roundabout can reduce delays, because half of the time a full stop would be required. Dedicated left turn signals further reduce throughput.

Roundabouts can reduce delays for pedestrians compared to traffic signals, because pedestrians are able to cross during any safe gap rather than waiting for a signal. During peak flows when large gaps are infrequent, the slower speed of traffic entering and exiting can still allow crossing, despite the smaller gaps.

Studies of roundabouts that replaced stop signs and/or traffic signals found that vehicle delays were reduced 13–89 percent and the proportion of vehicles that stopped was reduced 14–56 percent. Delays on major approaches increased as vehicles slowed to enter the roundabouts. 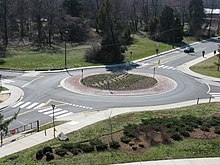 Small modern roundabout in the United States, where vehicles are driven on the right 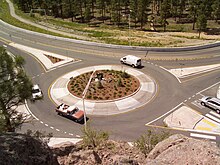 Roundabout in the United States with separated side lanes. Vehicles entering the roundabout give way to vehicles in the roundabout. As of March 2009 the road at upper left carries 10,400 vehicles per weekday.

Statistically, modern roundabouts are safer for drivers and pedestrians than both traffic circles and traditional intersections. Roundabouts are safer than both traffic circles and junctions—experiencing 39% fewer vehicle collisions, 76% fewer injuries and 90% fewer serious injuries and fatalities (according to a study of a sampling of roundabouts in the United States, when compared with the junctions they replaced). (Though, a more ideal metric would be a comparison to nearby similar intersections, since a need for replacement may be a confounding factor.) Some larger roundabouts take foot and bicycle traffic through underpasses or alternate routes. Clearwater Beach, Florida’s multi-lane roundabout has reduced its previously high cyclist death rate to zero since its construction.

At junctions with stop signs or traffic lights, the most serious accidents are right-angle, left-turn or head-on collisions where vehicles move fast and collide at high impact angles, e.g. head-on. Roundabouts virtually eliminate those types of crashes. Instead, most crashes are glancing blows at low angles of impact.

An analysis of the New Zealand national crash database for the period 1996–2000 shows that 26% of cyclists reported injury crashes happened at roundabouts, compared to 6% at traffic signals and 13% at priority controlled junctions. The New Zealand researchers propose that low vehicle speeds, circulatory lane markings and mountable centre aprons for trucks can reduce the problem.

The most common roundabout crash type for cyclists, according to the New Zealand study, involves a motor vehicle entering the roundabout and colliding with a cyclist who already is travelling around the roundabout (50%+ of cyclist/roundabout crashes in New Zealand fall into this category). The next most common crash type involves motorists leaving the roundabout colliding with cyclists who are continuing farther around the perimeter. Designs that have marked perimeter cycle lanes were found to be even less safe, suggesting that in roundabouts, cyclists should occupy a vehicle lane rather than a special lane. The researchers advised that drivers be forbidden from overtaking cyclists (as well as other vehicles) while in the circle.