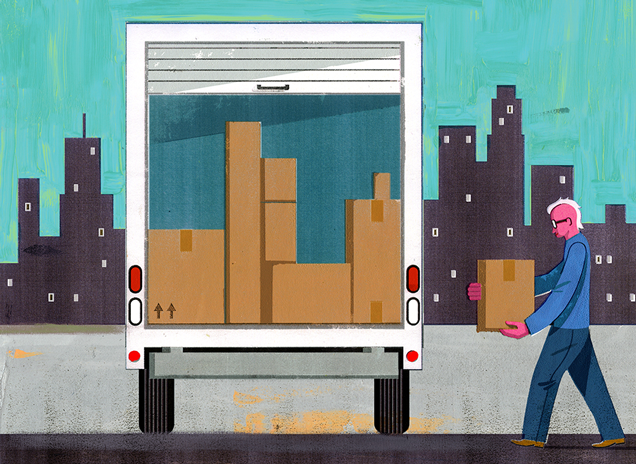 It’s actually hard to know what to believe about millennials, the Americans born after 1980 who make up the largest generation in history. Every week there’s a new ground-shattering revelation about their lifestyles—but the most conflicting reports have to do with where they live.

Over the last few years, across the country—around the world, too—people of all ages, including millennials, have been moving into cities at an astonishing rate. Now more than half of the world’s population is urban. So here’s the big question: Are today’s 20- and 30-somethings really going to live more urban lifestyles than Gen Xers or Boomers? Or are they going to eventually vacate cities for the ‘burbs, just like every generation before them?

Then came some interesting data, pegged to the release of 2014 Census information this spring: Millennials have indeed started moving out of big city downtowns—but not necessarily in favor of a quiet rural or suburban life.

Instead, we’re seeing a brand new trend: Thanks to the generation’s size and influence, millennials are moving to new places made just for them, by them—revitalizing smaller cities or opting for hybridized urban-burb enclaves where quality of life is the driving force.

The Rent Is Too Damn High

As the first wave of millennials started to take jobs, it seemed that this generation was dedicated to living and working downtown. According to different studies, millennials were prioritizing dense neighborhoods, helping to fuel the biking boom, even—whoa!—refusing to get their driver’s licenses. Companies luring millennials promoted their downtown locations with transit proximity, bike-commuting amenities, and other perks which aligned with these lifestyles.

But it turns out that many millennials weren’t ever planning on settling in cities for good—they were just putting off the move to the suburbs for a few more years. A report in May discovered that fund managers are betting on millennial ‘burb living by investing in car companies and single-family home builders. “Especially in the older millennials, we’re seeing a move towards more traditional patterns, just on a delayed time frame,” Sarah House, an economist at Wells Fargo, told Reuters.

But it’s not only about following “traditional” patterns, it’s also about being priced out of an insanely expensive housing market. Last month, Bloomberg crunched the most recent US Census data and came up with the Millennial Housing Affordability Index, declaring 13 cities completely unaffordable for home ownership based on estimated earnings for the millennials living there.

Bloomberg.com chart using data from US Census, Zillow.com and Bankrate.com

What’s happening with millennials and cities is really just part of a larger issue around the rising cost of housing that’s pricing out plenty of people in already-expensive cities. Of course moving into a city is going to be extra-unattainable, financially, for someone just starting out in their career. Maybe millennials are actually way smarter than everyone else for not staying in places they can’t realistically afford.

But it turns out that millennials are different in the sense that they’re coming up with innovative ideas for how to live well wherever they are—which sometimes means bringing the urban experience with them.

According to a recent study by the Urban Land Institute, “Gen Y and Housing: What They Want and Where They Want It,” a nationwide survey of millennials aged 19 to 36 showed that most of them were never living the glamorous downtown life that most stories like to describe. Only 13 percent of millennials in the survey lived in or near downtowns—the rest lived in other city neighborhoods—or in the suburbs.

Where millennials said they lived, based on the ULI’s survey

The kinds of places that millennials want to live share a lot of the same characteristics with urban centers—they’re looking for amenities like walkability and public transit. But according to the study, it’s more about relationships and having the time to enjoy those relationships, which doesn’t necessarily mean working long hours to pay the rent in a big city.

“Gen Yers want to live where it’s easy to have fun with friends and family, whether in the suburbs or closer in,” says M. Leanne Lachman, one author of the study. “This is a generation that places a high value on work-life balance and flexibility. They will switch housing and jobs as frequently as necessary to improve their quality of life.”

Chicago has always been a haven for young professionals. Its suburbs are also some of the most famous in the country, a sprawling bedroom community that ripples out from the urban core. But just like the way that Chicago’s inner city is focusing on making a lot of the changes that supposedly attract those young professionals—improving public spaces, redesigning pedestrian connections, and building more biking infrastructure—its suburbs are undergoing their own renaissance, too.

Midtown Square opened this year as a dense, transit-accessible, mixed-use development in Glenview, Illinois, a suburb of Chicago

These places once known for their large yards and reliance on cars are changing. According to a piece in this month’s Chicago Magazine, development is radically shifting in suburbs, mostly to accommodate millennials:

For example, in Wilmette, a town that’s historically limited rentals, the village board preliminarily approved a plan in May to build a 75-unit luxury apartment building with ground-floor stores on Green Bay Road, across from the Metra station. Units will average about $2,250 a month for 1,000 square feet. The village courted the project in concert with its master plan, which in 2014 raised height limits downtown from three to five stories.

These kinds of compact, livable communities that crop up in less-dense areas have all sorts of names, like New Urbanism and “walkable urban places,” but the one that’s stuck recently is “urban burbs”—and the urban burbs are a new kind of hybridized place made just for millennials.

Millennials might not be staying in the urban cores, but rather, they’re helping to remake the urban-like enclaves that allow easy access to the city when they want it. These places where millennials are choosing to live still have the qualities of downtowns—dense housing, transit connections, walkability, good food, great bars—without the high prices of downtowns.

I wanted to know if any of this rang true to actual millennials. So I talked to participants of the Millennial Trains Project, a nonprofit which selects a group of millennial entrepreneurs to travel across the country on an Amtrak train, stopping in cities along the way to meet with civic-minded startups. Each of the participants are required to crowdfund $5000 to pay for their own participation on the trip, and many end up forming relationships which spin off into new urban-minded projects.

There seemed to be a different trend for millennial living that was well-represented by the group. Instead of settling in big, expensive urban centers like New York, San Francisco, and Los Angeles, many of these millennials were leaving to look for opportunities in smaller cities.

Nicole Behnke is 24 and works at what she calls a “social architecture agency” in Milwaukee called NEWaukee, where she organizes events for young professionals. She has a car, although she doesn’t like to drive it. She has noticed some of her friends moving out into suburbs, but that’s not what she personally wanted out of a living situation: She recently closed on a condo in downtown Milwaukee.

For her, the choice to live in Milwaukee instead of, say, Chicago, or even its urban burbs, came down to more than just price (although that was a big factor). While visiting San Antonio during the Millennial Trains adventure—a place she had always perceived to be in the shadow of Austin—she saw the incredible opportunity offered by her move to Milwaukee. She realized that moving to a smaller city was allowing her to help shape a community.

After traveling to so many cities and seeing this generation in action, Behnke believes that millennials want to be invested in where they live in a way that their parents were not. Whether it’s driving changes in the suburbs or revitalizing a smaller city, 79 million Americans who want to make their communities even a little bit better is a very good thing for the country—and there might not be a better legacy for any generation in history.